Posted on August 31, 2018 by SmokeBeerMinistry 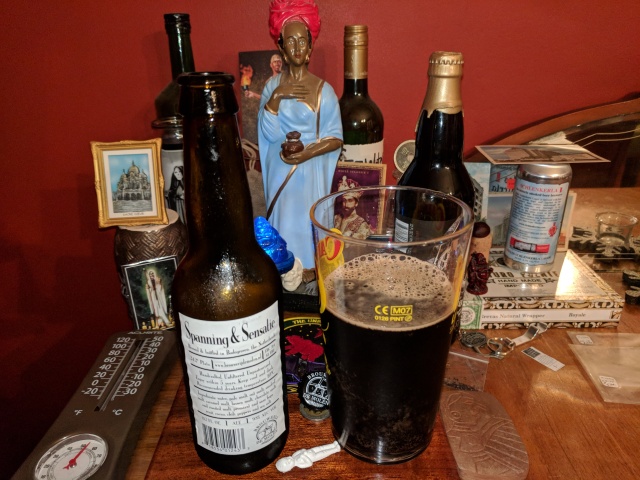 This is the final of 5 De Molen beer reviews, completing Tabernacle Takeover month with a respectable entrant, Spanning & Sensatie (Excitement & Sensation literally, Thrills and Spills in meaning). This beer is a solid smoked beer, with some bitter ashes, fleeting chocolate, and just a wee bit of heat which builds up slightly before the beer is done. This beer delivers what I must describe as that element that only De Molen can deliver, its a flavor that is distinct in all five of the DM beers I’ve had this month, and its the inarticulate nature of my mind grapes that drives me to invent the word DeMoleny. Out of the world’s upper echelon brewers, of which De Molen resides, Spanning, and pretty much everything else smoked that we’ve had, are in the middle of the road of the upper echelon. Like someone on the all-star team, but only used as an alternate. Or a world class dual citizen soccer player who has to choose the less competitive country to play for in the World Cup. It was a fun month, and expensive too. No ragrets. Maybe I’ll take next week off. Final smoke metric = 5 smokestacks.

I like beers that taste like smoke.
View all posts by SmokeBeerMinistry →
This entry was posted in Beer, Educate, Enlighten, rauchbier, Smokebeer and tagged 5 - 6, cacao, chili beer, chocolate, De Molen, imperial, pepper, salted, Stout, The Netherlands. Bookmark the permalink.