Posted on February 7, 2016 by SmokeBeerMinistry 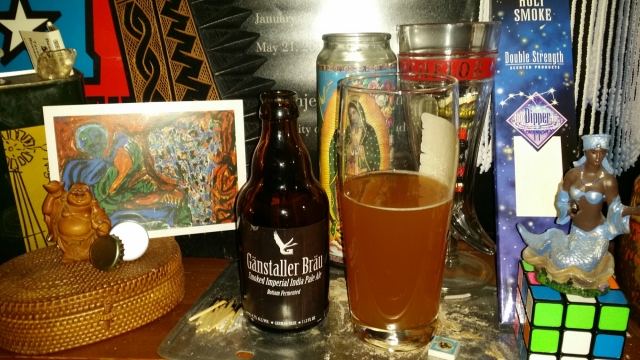 I opened this one up and was greeted with a very pleasant campfire smell which prompted me to say, “oooh!” This bottom fermented Smoked Imperial India Pale Ale poured nice as well and due to my personal pouring technique, the yeast and sediment held in place and did not stir and cloud up the beer at all, which is easy to lose sight of when drinking. Bottom fermenting is unusual in ales because ale is typically thought of as a top fermenting beer (yeast), while lagers are traditionally the bottom fermenting counterpart to the two branches in the trunk of the beer family tree, we’ll have to do more research to see what Michael Jackson had to say about this. The taste held up too with a nice campfire taste to it (not always the case to have the smell profile match the taste) and in this case, it’s pretty close. I’m getting a dry and slightly bitter taste as expected of IPAs, thankfully Gänstaller Bräu did not simply dump a bunch of hops into the brew in the hopes of blowing your fuckin mind, as seems to be the case for about 80% of all breweries 5 years old and younger. No, Gänstaller Bräu’s Smoked Imperial India Pale Ale is clearly steeped in tradition, well refined, where ingredients are used to balance out flavors and add stability to the beer. I don’t have much else to say. Overall desirability quantified in a roundabout analogistic metric where smokestacks represent increments in a bar graph: 5 out of 7 smokestacks.

I’m afraid at the time of this posting, their website is under construction… haven’t seen that in a while:

I like beers that taste like smoke.
View all posts by SmokeBeerMinistry →
This entry was posted in Beer, Educate, Enlighten, rauchbier, Smokebeer and tagged 5 - 6, Gänstaller Bräu, Germany, imperial, IPA, lager. Bookmark the permalink.