Posted on January 24, 2016 by SmokeBeerMinistry 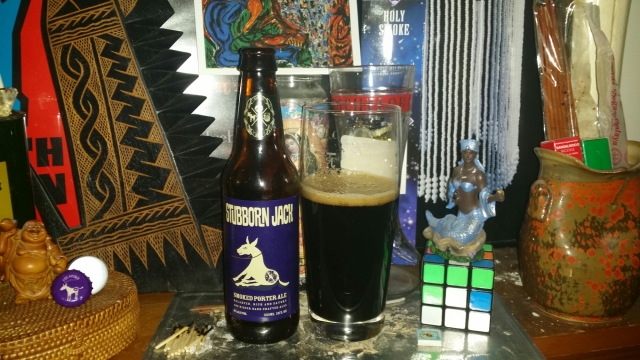 Smells like a thick, rich, and delicious barrel aged smoked beer. Looks and pours like one too. But the taste… where is the taste? My palate was quite prepared for something at the opposite end of the spectrum, but that something never materialized. Stubborn Jack is like a super watered down Fore Smoked Stout. Stubborn Jack might take the cake for misrepresentation. This beer does not walk the walk. Upon further inspection the 6% abv. was one clue. Also, the opacity metric did measure light penetration at 2 inches (meaning there is less substance in the beer to stop light from passing through, even though it is fairly dark, like Coca Cola, it is also thin like coke, and doesn’t lace the inside of a glass very well. But the lack of taste is too surprising. From what I can gather out of this glass includes: slight smoke, slight ash, tastes like a porter (I will give them that), but I will not give them any repeat business. The Ass Kissers Porter Pounder was better… They should make that one again. Overall Smokestack Factor 2 out of 7.

Chart will be dropped in whenever I feel like it.

Until then, feel free to figure out what’s going on with these Ass Kissers, because it looks like they closed, at: http://www.brewerydb.com/brewery/pqSkmD

I like beers that taste like smoke.
View all posts by SmokeBeerMinistry →
This entry was posted in Beer, Educate, Enlighten, rauchbier, Smokebeer and tagged 2 - 3, ale, Ass Kisser, California, porter. Bookmark the permalink.