Posted on November 10, 2017 by SmokeBeerMinistry 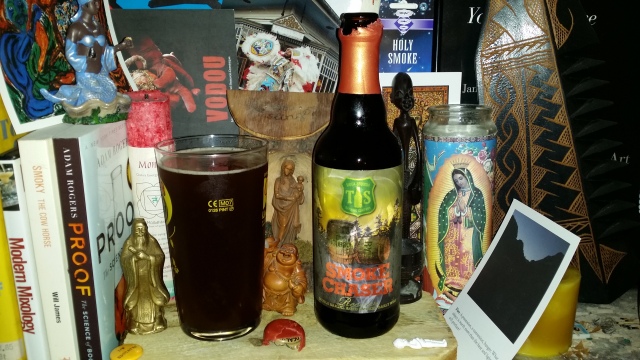 Part 3 for the SMOKE CHASER barrel variants, and the takeaway is, they’re all the same beer. Without having had the two other versions of this beer in rapid succession (a rye whiskey barrel aged version and a bourbon barrel aged one), I would struggle to identify these as different beers. This one in particular, Smoke Chaser Reserve is merely one of their smoked barley wine beers that’s been in both kinds of barrels. Given the mediocre overall score and the limited bottle count (only 1000 bottles produced), it’s easy to deduce that this beer was a small scale experiment that was just successful enough to justify selling it to the public. Maybe I’m being too harsh, but I had high hopes with the small bottle count, barrel aging, and waxed caps. This beer is too bitter. Its a robust barley wine with great barley wine flavors in there, marred with too much alcohol, short on sugary sweetness, and muddled in international bitterness units. That’s too bad because there seems to be plenty of time, money, and effort put into the production. Having said that, the 3.5 (out of 7) isn’t all that bad of an overall score. Four is the score we give middle of the road beers, where we can’t say anything bad, or recommend to a friend. One more thing, however; enjoy with a cigar. The Rye Whiskey barrel version of this beer recommended such, and I didn’t take them up on it until I got to this beer, and I must say, drinking and smoking is a combination that worked out in this beer’s favor, and I will certainly try again.