Posted on November 3, 2017 by SmokeBeerMinistry 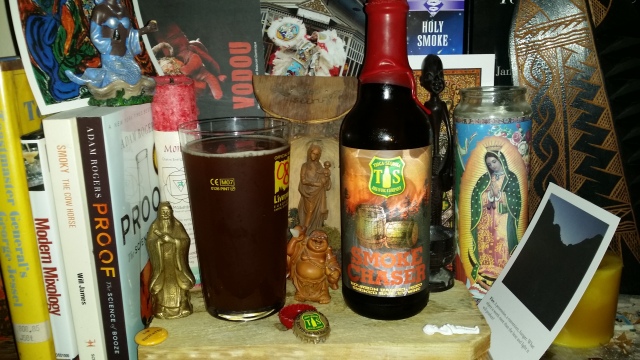 Here’s part 2 for SMOKE CHASER, the bourbon barrel aged smoked barley wine beer by Tioga-Sequoia. There are no more than 999 of these still floating around out there, so if you want one, go now, but you should probably read this review first. Smoke Chaser Bourbon Barrel is one of 3 variants SmokeBeerMinistry got our hands on to review which began right after pouring it into the big glass seen above. It’s a lighter hue than the rye barrel variant, but considerably cloudier, however, my light meter shone (shined?) right through the glass, illuminating the entire beer like a light bulb, so a not so opaque beer. This beer smells about the same as the rye barrel variant, leaving a pronounced barley wine scent in the general vicinity of the pour. Smoke is there but on the expected lighter end given cherry wood was used in the smoking process. And the taste starts out as bitter; I like mine sweet, not bitter. You get used to the bitterness pretty quickly, probably because the 15.1% alcohol numbs every section of your palate (maybe I should have gone with the small pours as TS recommended). Barrel aging usually improves beers for me, but I can only hope this is not the case here. Smoke Chaser Bourbon Barrel is a bit frustrating, proper ingredients were used, barrel aging is a time consuming process, but the finished product is a below average score. In this particular case, I’d recommend backing down with some of the competing elements; cap it at 10% ABV, use less hops, and shorter barreling times. I’m a little concerned with the Smoke Chaser Double Barrel variant coming up next week. Tioga-Sequoia works to make progress towards our standards with a 3.25 overall smokestack rating (out of 7).