Saugatuck – Bonfire Brown – 4 smokestacks out of 7

Posted on October 20, 2017 by SmokeBeerMinistry 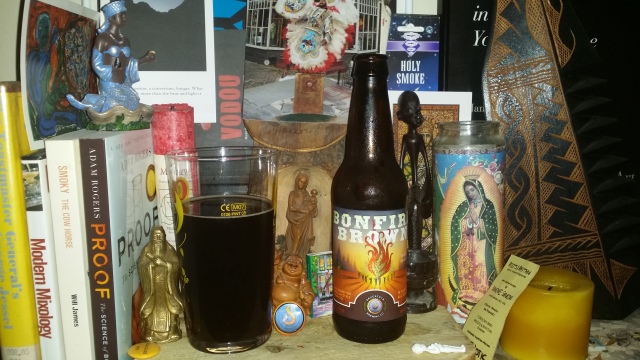 Its got fire in the name. Its got a picture of fire, and some kind of spiritual seance or some shit going on in the picture (which doesn’t indicate smoke, but at least it excites ministers in Smoke Beer Ministry). Its got the phrase “slight hint of smoke in the finish” written on the box. And, it delivers on that slight hint, although I wish it were more. This beer is a great brown ale, but we here at SBM grade on a smokebeer curve, which leaves this at a 4 out of 7 smokestack rating. Nothing to be concerned about for Saugatuck given that I’d use this beer as a daily drinker if I weren’t livin on Miller High Life money at the moment (really nailed that last job interview; wonder why they didn’t all rush to read my beer blog I talked incessantly about?) Whatever may be the cause for my financial constraints is really no concern of yours. The roasted malt aroma at the front door should be of greater concern right now. Along with one of my favorite kinds of fire, the bonfire. This Bonfire Brown ale has won all kinds of major awards, gold I think. I could use some awards right now. The plasma screen went out and I can’t find any bulging capacitors to swap out. Trying to save me some money by fixin it myself. I got the whole thing opened up and pieces laying all over the living room floor. There’s gonna be hell to pay when my wife sees this. In conclusion, Bonfire Brown, good everyday drinker, but you shouldn’t drink every day. 4 smokestacks.

Check out their awards:

I like beers that taste like smoke.
View all posts by SmokeBeerMinistry →
This entry was posted in Beer, Educate, Enlighten, rauchbier, Smokebeer and tagged 4 - 5, brown ale, Michigan, Saugatuck Brewing. Bookmark the permalink.