Posted on September 28, 2016 by SmokeBeerMinistry 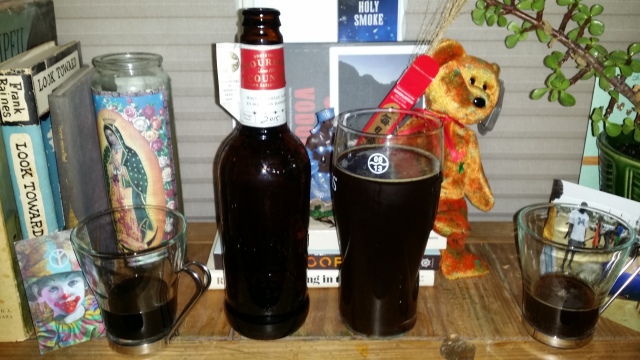 In my travels during smokebeer hunts, I stumble across some of the more highly sought after beers. SmokeBeerMinistry’s emphasis will stick with smokebeers, but periodic investigations into all the hubbub will materialize, as seen here.

This is an excellent barleywine. Goose Island’s Bourbon County Barleywine Ale has matched the only other time that SBM has had a great barleywine beer. The first time was around 2006 when a brewer at The Great Dane Pub in Madison, WI made a one-off special brew that had to sit in one of their brewing tanks for over a year to process properly (a great sacrifice for a small operation). I got to try that beer at the release where they only offered half snifters in the hopes of getting it out to as many people as possible. Ever since then I have sought out that taste never to find its equal, until now.

Bourbon County Barleywine smells very similar to the regular and much famed Bourbon County Brand Stout beer but with deep cherry notes more so than vanilla. I had them both on hand to help pull out similarities, of which there weren’t too many, and to add an element of regality and intoxication into my own life. This beer is sweet and tart. Flavorful robust stout notes make the beer’s time spent in a barrel value added. This beer is also helped along by the high booze count seemingly extracted from a fine wine. A cornucopia of dried fruits, coniferous rain forests, and leather furniture in a log cabin are included in this bottle. This is a good beer. I’m fairly drunk now.

Here’s a better image of the two, BCBS and BCBW, side by side and underlit.

I like beers that taste like smoke.
View all posts by SmokeBeerMinistry →
This entry was posted in Beer, Educate, Enlighten, rauchbier, Smokebeer and tagged 6 - 7, barley wine, barrel aged, boozy, Goose Island, Illinois, not a smokebeer, oak, rare, vanilla. Bookmark the permalink.