Posted on June 20, 2016 by SmokeBeerMinistry 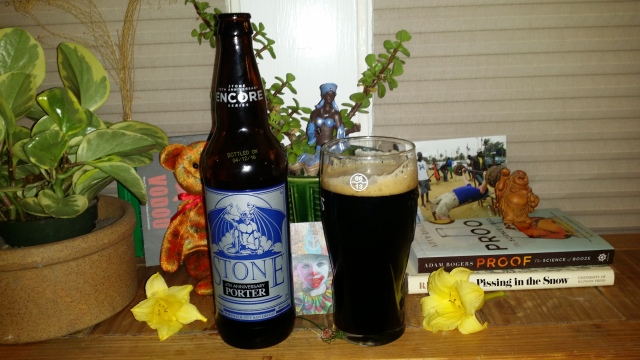 Good news… this beer tastes ALMOST EXACTLY like the Stone 6th Anniversary Porter on draft. It is so similar that I am going to copy and paste most of my review of the draft below. I will say this however, the beer in the bottle was a little less bitter.

Stone 6th Anniversary Porter tastes a good bit like all their other smoke beers. A little less smoky (4.5 smokestacks of smokepower taste) and more hoppy. It tastes acidic, which makes sense, this recipe is one of their old recipes that they dusted off from about 15 years ago, started making again, and just this year sent it out into their supply chain. One thing that I know about craft beer 15 years ago was that we were all discovering hops, and Stone was a main offender for pumping copious amounts of hops into just about everything. Nowadays we’re lazered in on gose and barrel aging… (Texas is just now discovering hops). And after a few sips, I’m thinking, “maybe I can’t taste the smoke anymore.” Color =4 smokestacks of darkness. It’s a thinner beer, light penetration at 1.5 inches. Smokepower smell is 4 out of 7 with a light sausage detection, just a touch of meatiness in this beer. The bitter acidity keeps bouncing around in my head though. I must say, I’m a little bummed, I was excited about this one, although I guess I shouldn’t be, assuming that there was a legitimate reason that Stone quit making this in the first place. I like this less than the regular Stone Smoked Porter, which is mediocre at best. Overall happiness metric = less than mediocre = 3.5 smokestacks.

Learn more at the potentially “too much of a good thing” website:

I like beers that taste like smoke.
View all posts by SmokeBeerMinistry →
This entry was posted in Beer, Educate, Enlighten, rauchbier, Smokebeer and tagged 3 - 4, California, porter, Stone. Bookmark the permalink.