Posted on March 25, 2016 by SmokeBeerMinistry 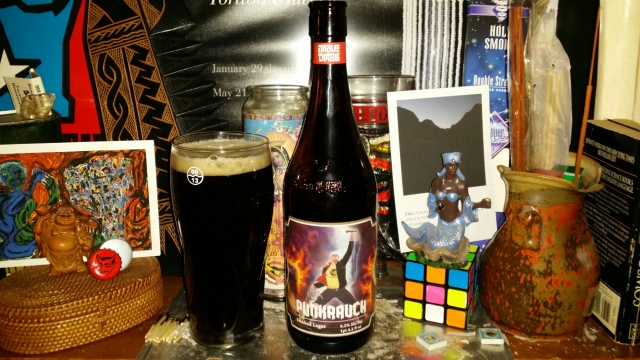 I was too excited to let this one wait its turn and had to review it right away. Punkrauch, an unfamiliar beer, comes from an unfamiliar brewer (Le Trou Du Diable), with one badass image on the label. A cool bottle cap, a cool bottle, not to mention putting “rauch” in the name and clarifying that with the “Smoked Lager” descriptor alerting SBM that this beer was made by devotees (apparently one of the Hanson Brothers… uh, the Canadian Hanson Brothers, big difference). I popped off the devil bottle cap (seen left) and was not overwhelmed by a smoky smell. And the color, while dark, is not so dense, and allows light to pass through. Punkrauch tastes like a smokebeer, with Bamberg-esque malts, which faded pretty quickly. It poured nice and neat with a decent blond head that left nice lacing on the glass. Slight campfire smell and taste, slight sour notes; strikes me as a thirst quenching beer, which I would not equate with a $10 price tag and a champagne bottle. Emits a nice deep ruby hue when held up to a light, which was immediately followed by potentially visually induced tart notes of dried cherries, hmm. The verdict: I like this beer. It’s a little bit of pomp and circumstance, a bit overpriced, but still a pleasant drinking experience. Overall happiness metric 4.5 out of 7.

I hope your French is up to snuff:

I like beers that taste like smoke.
View all posts by SmokeBeerMinistry →
This entry was posted in Beer, Educate, Enlighten, rauchbier, Smokebeer and tagged 4 - 5, Canada, lager, Le Trou Du Diable. Bookmark the permalink.