Posted on October 25, 2014 by SmokeBeerMinistry 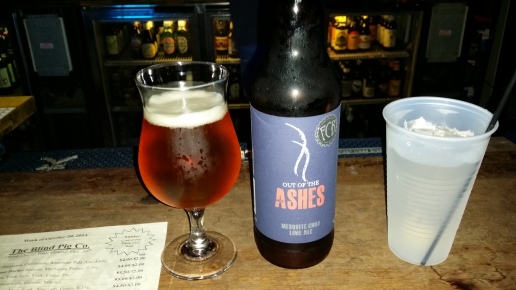 I’m not one to rush out and get the chili beer every year that so and so local brewery decides to make one, in fact, I don’t even like them all that much. But certain organizations have found it financially reasonable to occasionally brew chili pepper beers, and on a rare few occasions, they mix in smoke. This is one of those occasions and the initial reaction is a positive one. For $12 at The Blind Pig in Champaign, IL, you can get a bomber of FCB Mesquite Chili Lime Ale. The chili’s are all over this beer; in the nose, on the tongue, on the back of the throat (for several minutes after each sip), and even on the label. Smoke smell is present (3 of 7 smokestacks), but after just a few chugs, the nose kinda checks out and you just have to rely only on taste. Speaking of taste, there’s a lot of it (5 of 7 smokestacks). The marriage of chili and smoke is just about right, with a mixture of campfire, charcoal ashes, and smoked chorizo (sausage presence). Opacity comes in at 2 of 7, although this place is so dimly lit, it could get bumped down to a 1 at some point in the future. One funny thing about this beer is that I can’t find any lime in it at all (for better or worse). I’m sure I could go on and on about this beer, which I am enjoying, but I’m feeling awkward sitting here with my phone out just typing away and snapping photos. Overall happiness 5 out of 7.

I’ve been to Colorado:

I like beers that taste like smoke.
View all posts by SmokeBeerMinistry →
This entry was posted in Beer, Educate, Enlighten, rauchbier, Smokebeer and tagged 5 - 6, ale, Colorado, Fort Collins, lime, mesquite, pepper. Bookmark the permalink.