Posted on September 21, 2018 by SmokeBeerMinistry 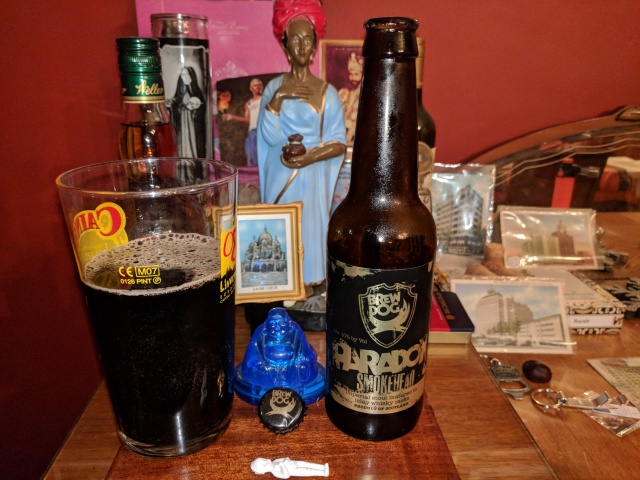 Here’s a paradox, I cannot recommend this beer, but I want another. I originally had BrewDog Paradox Smokehead a looong time ago, and was the first documented smokebeer reviewed on SmokeBeerMinistry (see here), and the results were similar. But this time, I’m at least interested enough to keep thinking about it.

The brewers at BrewDog, in collaboration with the team at Smokehead Scotch whiskey makers, put this Paradox smokebeer together a few years back, and now have made it onto this site (I’m sure they’re thrilled). I was a little nervous about how this was going to pan out with the pour so void of carbonation, but lifting the bottle above the glass a good foot or so as I poured, agitated the beer enough to develop the bit of suds seen in the pic. And the smell was loaded with scotch whiskey and barrel notes, but not so much smoke. And on the first sip I noticed that this was loaded with booze, leaving a warm sensation on the back of my throat, a nice consolation given that the barrel and heavy peat scotch were doing all the driving on my palate. Do you know peat? Peat is the mud substance with rotting weeds, roots, and fibers in it, all matted down for centuries, and then dried and used as fuel for heat as well as for smoking malts for eccentric beer brewers. Paradox and Smokehead have used peat smoked malts which makes for extremely earthy and scotch flavors in this beer. I had a hard time getting into this beer, even at a warmer than normal temperature (but colder than the room temperature recommendation given by BrewDog). I feel like I should like this beer, but since this beer has been discontinued, I doubt I’ll find it again. I’m sure that if BrewDog liked it more, they would’ve kept making it. That’s all I have to say. Final smokestack rating = 3.5 smokestacks out of 7.