Posted on February 4, 2017 by SmokeBeerMinistry 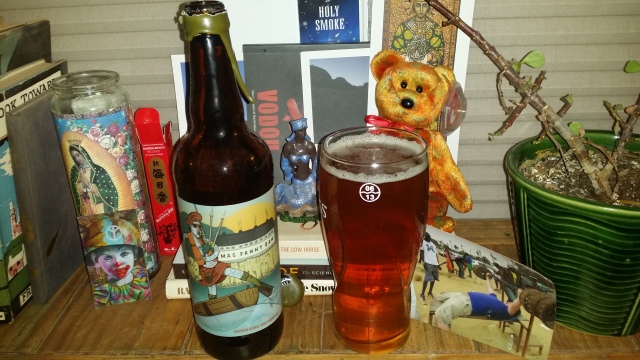 Against the Grain’s Mac Fanny Baw (bottle) ain’t so bad. A nice campfire smoke taste greets you at the first sip although the smoke smells are more hidden. Bitter flavors are in there too. Then, as I sat there watching TV, drinking this beer, and jotting down fleeting thoughts so I could right this review, I noticed that my hand was reaching for the beer less and less often. Barrel power in this beer is super low (a complete 180 from this beer back when I had it on tap) garnering only 2 barrel power points. This beer is dry. Good overall smell, which makes this a bit of an anomaly, why am I not more into you? There just isn’t enough going on in this one. And, now the booze is catching up. One more thing, the team at Against the Grain isn’t funny, they should just focus on beer. Overall, just below average at 3.8 smokestacks (out of 7).

Here’s the review for the one on draft: https://smokebeerministry.wordpress.com/2013/01/08/against-the-grain-louisville-ky-smoke-2-out-of-7/

They probably need to figure out why this beer tastes so different over the years.

I like beers that taste like smoke.
View all posts by SmokeBeerMinistry →
This entry was posted in Beer, Educate, Enlighten, rauchbier, Smokebeer and tagged 3 - 4, against the grain, barrel aged, Kentucky, salted. Bookmark the permalink.