Posted on December 29, 2016 by SmokeBeerMinistry 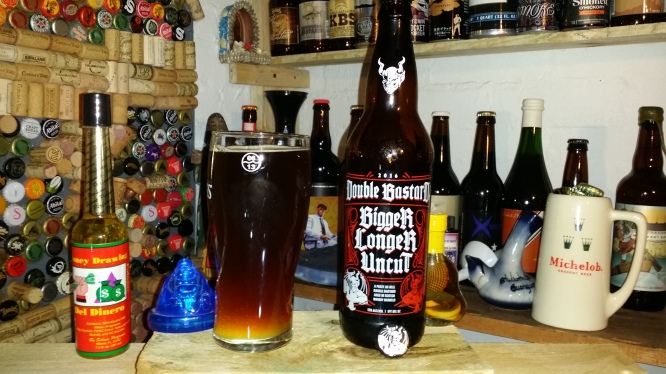 I liked this beer. I had to get that out of the way before I start insulting Stone Brewing, Arrogant Brewing, the person who named the beer, the graphic designer who isn’t pulling their weight. Hang on, I won’t insult them, I’m cool, I won’t lash out.

This beer smells good. I smelled the smoke right after opening it; a sweet peat smoke with those elements of whatever it is that you get in just about every Stone beer that they make (probably the hops). Upon the first taste, “Oh it burns, it burns, but it’s a good burn.” There’s something about scotch that has always made me think it was watery, and given the high degree of scotch flavors that are coming through as a result of the scotch barrel aging step in the production of this beer, that connection comes through here as well. This beer is filtered. This could, perhaps should, be poured into a snifter, but tonight I’m downing the whole 22oz’s of 13% all by my lonesome, which generates positive externalities. This beer could go one step further, though. I would like a few more darkening and viscosity agents added. That would create a really fearful beer that I could get into. Great effort here Stone, or Arrogant Brewing, or whoever you are. Overall Smokestack Rating = 5.2 smokestacks out of 7.

I found this link to some company called Arrogant Brewing. I guess it’s like spin off company of Stone Brewing without any efforts made to differentiate the two companies, a new logo would be a good place to start. Whatever, everybody’s nuts over on the west coast.

I like beers that taste like smoke.
View all posts by SmokeBeerMinistry →
This entry was posted in Beer, Educate, Enlighten, rauchbier, Smokebeer and tagged 5 - 6, Arrogant Brewing, barrel aged, boozy, California, double, peat, scotch. Bookmark the permalink.