Posted on August 22, 2016 by SmokeBeerMinistry 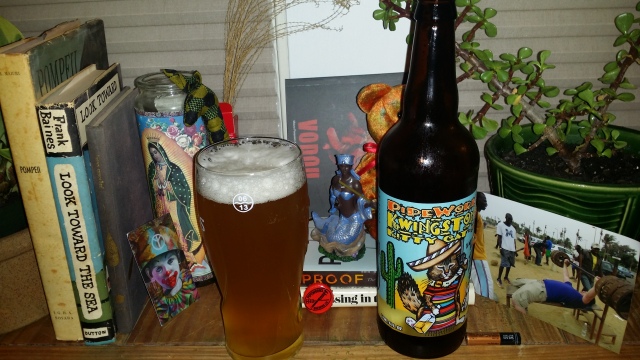 “Kwingston’s Kitty Cat-INA A meow-Gartita inspired pale ale brewed with agave nectar, smoked wheat, lime, orange zest, and salt” is just about the dumbest thing I’ve seen printed on a bottle since someone put an image of a guy shitting himself on their label. In this case, it is far less offensive. Maybe I’m being too hard on Pipeworks. I didn’t really read the bottle once I saw the word smoked printed on the side. And that includes a note which read’s “STOP – READ BEFORE OPENING…” and goes on to alert the consumer of sediment in the bottle (a kind gesture). And, I didn’t recognize a cat on the bottle until after I smelled it and detected notes of cat pee. I smelled smoke too, underneath the tangerine/grapefruit/cat pee. This beer tastes sweeter than it smells with citrus up and down in there. The margarita flavors come through in hints but not much more. This beer can easily classify as a beer, and not some off-putting carbonated Mexican imposter Zima drink. The more I drink it, the less I like it. Let’s hope the 7.2% abv kicks in pretty soon here or else I might pour this out. I wonder if Pipeworks smelled the ammonia and then thought it’d be funny to put a cat on the label? I wonder if they can make the same beer twice? Because their website shows hundreds of different beers including this very beer with 9% abv described, where my bottle states 7.2% abv. That’s not a good sign because even if the brewer stumbles upon a great recipe (and they did not in this case), they wouldn’t be able to replicate that even if they tried… mere speculation with the hope of being proven wrong. Overall (un)happiness metric – a stringent 2 out of 7 smokestacks. We wish you the best Pipeworks, give us a shout-out if you need some consulting.

I like beers that taste like smoke.
View all posts by SmokeBeerMinistry →
This entry was posted in Beer, Educate, Enlighten, rauchbier, Smokebeer and tagged 2 - 3, Illinois, lime, pale ale, Pipeworks, salted, tequila, wheat. Bookmark the permalink.