Posted on October 27, 2014 by SmokeBeerMinistry 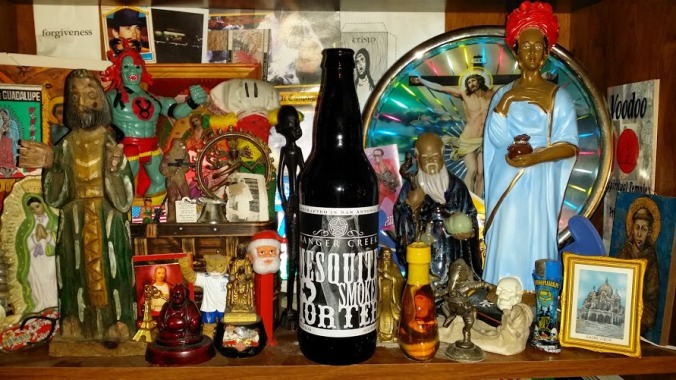 Ranger Creek has one of the cooler looking labels. The beer looks great too with a nice dark 6.5 opacity rating. As it pours out the smell of sweetness jumped out at me, with notes of smoke on the tail end. A justifiably proud George Hamilton tanned head rose above the rim, and then took it one step too far. And the silt tried, and failed, to crash the party toward the end of my pour. Now this particular one was a little foamier and had the silt, which I have never really noticed before (must be a fluke), because I’ve had a bunch of these with no incidents to speak of until now. And the taste really mimics the smell nice and neatly. When I breathed out after my big gulps the crackling campfire smoke smell gets a little more brazen. I hope Ranger Creek keeps making this one. Overall Happiness: 5 out of 7 Smokestacks.

I’ve gotta look into their distillery:

I like beers that taste like smoke.
View all posts by SmokeBeerMinistry →
This entry was posted in Beer, Educate, Enlighten, rauchbier, Smokebeer and tagged 5 - 6, mesquite, porter, Ranger Creek, Texas. Bookmark the permalink.